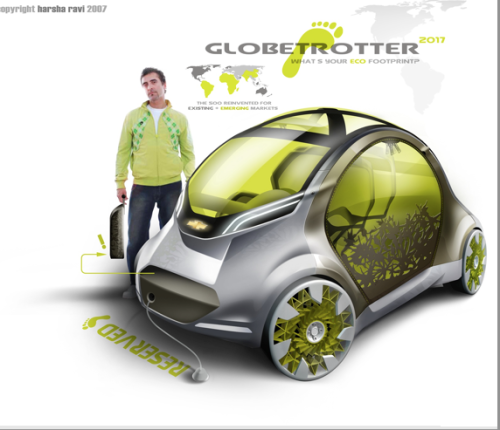 I have seriously wondered if genius has genetic, hereditary roots. Or is it something geniuses eat?
Jeeves, the brainy genius of a “gentleman’s personal gentleman”, was fond of eating fish, which did a lot to energise his brain cells, Bertie Wooster always told us. Apart from the Curies (Marie and Pierre), my feeble mind cannot, off the cuff, recall other families where geniuses flourished. Oh, yes, the Marx brothers.
“Well, get to the effington post, will ya?”, you say, not without a less-than-benevolent look on your ugly face?

Well, here is the beef. 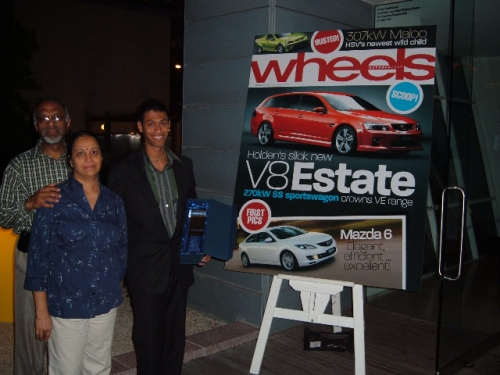 (Harsha with parents Kala and Ravi)

Harsha Ravi has been awarded, this very month, the title of the Australian Young Designer of The Year by Wheels magazine. He is, I am proud to say, my nephew. Hence the thought of genius being familial. Has mine rubbed off on him? A more reliable part of my brain asks me if there is any hope for his brilliance rubbing off on me, at an age when one fears that, tomorrow, one’s arteries could become stiffer than one’s sexual organs, especially in times of need.

On the 50th anniversary of the Fiat 500, we shall use the intervening technology to completely reinvent the urban vehicle. Functional, frugal and fun, our 500 will be a 2+1 design doubly true to its name: 500cc, 500kg. Design it. 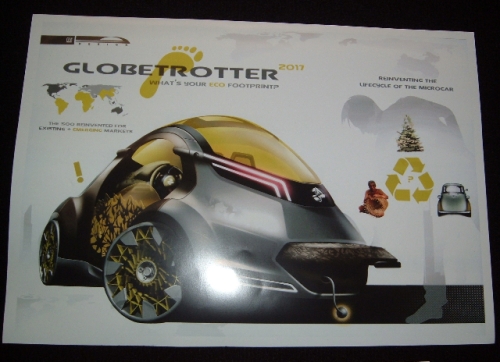 Harsha just did that. And outdid himself, too.
Hear this from the judges and critics:

“[He has] applied technology in a way that made sense.”

Take, for example, its carbon-neutral, bioplastic body with 12 percent petroleum-based/88 percent corn-based plastic that reduces the energy needed to manufacture the panels by 30 percent.

The design presented as a wild concept, yet it brought thoroughly considered, integrated design with enough tech detail and illustration to flesh it out. Sargeant and Stolfo agreed: “He has obviously done a lot of research before even putting pen to paper.”

Despite its ahead-of-time technology — the zinc-air fuel cell, nano-paper battery and airless tyres were just the beginning — attention was also given to regional manufacture, right down to the illustration of a basket-weaver manufacturing the woven seat material, one of many touches that delighted and amused the judges. 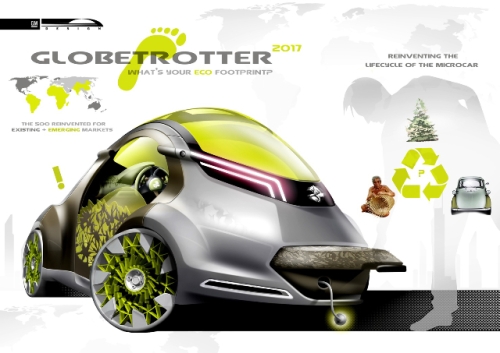 What, essentially, is this car, GM Globetrotter, about?
Harsha says:

The GM Globetrotter is inventive as a lightweight, nimble urban vehicle aimed at various emerging and developed markets in 2017. A decade from now, the worldwide culture will be one of environmental consciousness, where increased awareness of climate issues will have engendered a scrutinising and well-educated Gen-Y consumer niche. They will demand aunthenticity and transparency in how a product’s lifecycle is managed
to reduce environmental harm. 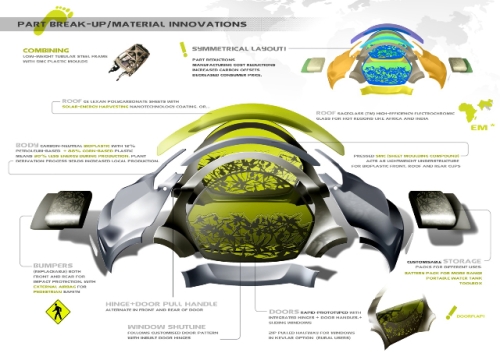 Given the likelihood that tomorrow’s consumers will be environment-sensitive, Globetrotter is designed from the ground-up and inside-out to be customisable and minimalistic at every step. It aspires to be functional, frugal, and fun, and gentle on the environment as well. The level of individualisation this offers to the consumer market allows for the car to seamlessly fit into virtually any global context.

What is it like to design a car? I asked Harsha.

The automotive design process begins by laying out vehicle architectures to act as templates for designers to start sketching over.
Car designers are often also art nuts, and have a profound understanding and appreciation of various creative media, which we draw upon for inspiration to create the visual surfaces of the car both inside and out. 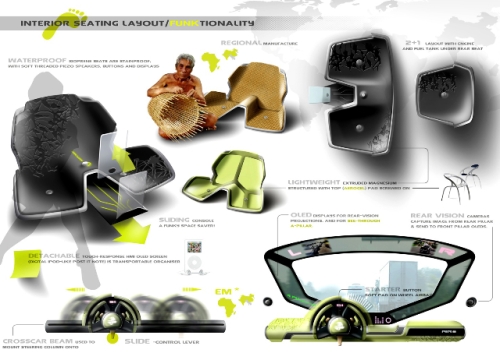 Once a 2D representation of the designer’s vision is seen to have potential, it is then translated by computer modelers into 3D space, a developmental process which runs in parallel with a tangible sculpture being carved out of a unique automotive clay. Often, it takes several iterations of the designer’s sketch, together with a dedicated team of designers, modelers, engineers, and software whizzes all combining their efforts over a 4-5 year period to ready the vehicle for manufacture.

Harsha says that automotive design is “deeply satisfying” for him, like a dynamic sculpture, “full of visual and emotive appeal.”

Now, considering that he is barely twenty, that is really insightful and philosophical. And lest I sound like the patronising uncle I don’t want to be, I shall stop right now.