My long-suffering readers know that I am not famous for using intemperate language in this and other blogs.
The taken-aback, perineally loyal Rambophile may wonder, “Pagla gaya kya?”, which is a Hebrew expression meaning, “I love him, V Day to D Day!”. Speaking of which, incidentally, I posted on Facebook that I was wondering if, at my tender age, I should be celebrating this: 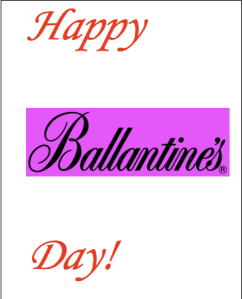 Tender, incidentally, is not a politically correct word, in this age and context.

Before I wade into another mile of this nonsensical ramble, I should set the record straight:
I don’t mean Effing in your kind of effing sense.
This is a radical, new verb. My invention. It intends to describe an activity that “uses E-sources for Food and Fitness.”
Brilliant, wouldn’t you say?
So, let us carry on about Effing.
This post, following on from the earth-shaking previous one titled ‘The Fat Loss Plateau and Beyond’, is focused more on the same, by popular demand.
I promise you I will talk sense, and will not bore you with statistics and evidence. I will, instead, use my anecdotal example.
I started working out in the gym an year ago. I found I was getting stronger, but I knew I had a long way to go before I could be considered fit. I also found that I had lost only so much fat in spite of a lot of effort. This is the very common conundrum that is called the fat loss plateau.
I used certain tricks that are threatening to make me the next Adonis with a six-pack neck (anywhere else, it is all so passé, so upwardly upper class!).
I got a free account in FitDay. This made me focus on exactly what I was eating on a daily basis. The results astounded me. Take a look.
This is a typical day’s intake when I was working hard and yet seeing no fat loss worth the name: 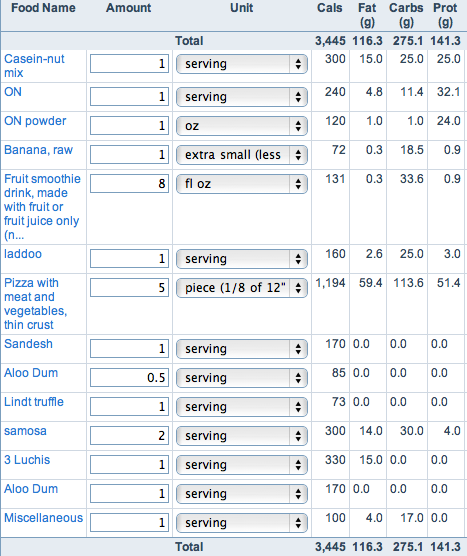 You can see that a huge truck-load of calories was coming from carbohydrates in the flour and other grain sources, apart from sugars. Luchis are fried breads, aloo dum is fried potatoes in gravy, and samosa is a savory- fried flour pastry stuffed with spicy potatoes and a few minor vegetables.
I decided to cut that out. On the day when I fast and then break it, eating gustily in the four-hour window (read previous post on the subject linked to above), see what happens: 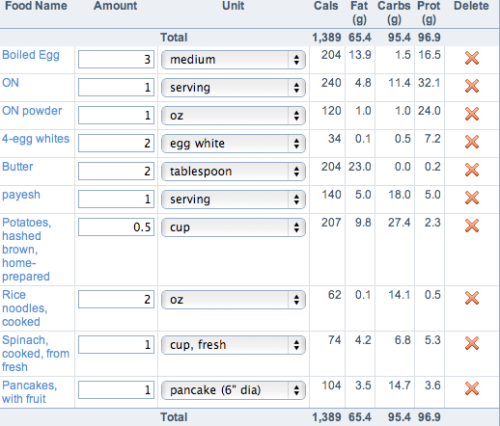 I still ate rice and pancakes (the Indian equivalent) but I logged less than a hundred grams of carbs (and far too low of the proteins I need), and only half the calories I could have eaten. But that was because my mother cooked for a family get together, and who can miss out on mothers’ cooking, right? Incidentally, you can see how badly balanced a South Indian vegetarian diet is (the last four items were ‘aloo curry’, ‘sevai’, ‘kirai’ and ‘appam‘) from the chart. The names ‘ON’, and ‘ON’ powder refer to the whey protein supplement made by Optimum Nutrition. Casein is ‘channa‘- milk protein.

So, I cut out grains from my diet. I checked again, another day: 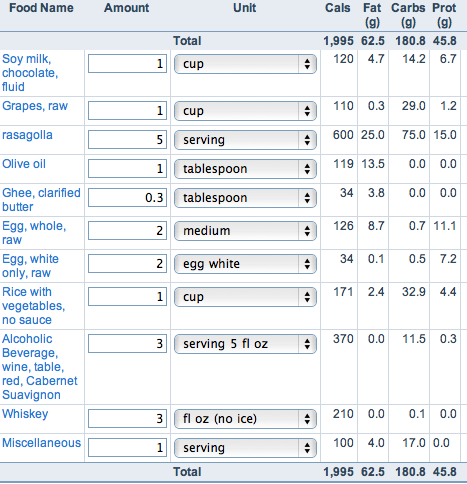 I was still eating some rice, and worse, I was getting a lot of calories from the occasional ‘treat yourself’ sweets and the modest alcohol I drank on a given day (a get-together of family or friends). This was revealing: in spite of a conscious effort, I was still letting things slip, thereby blunting the results. I became more vigilant. Look at the typical IF day chart now: 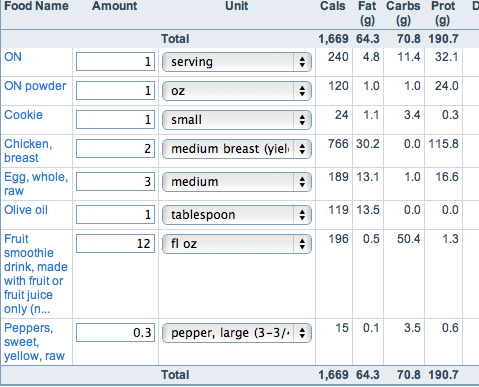 Violá! I was hitting the sweet spot: I was actually consuming more proteins and fats, and getting closer to the 50 grams daily dose of carbs I was looking for. I think a carb intake of up to 100 grams daily should be good enough for fat loss, especially if you eat clean and keep within your total caloric requirements. Think Primal Living.

So Intermittent Fasting works well to reduce total calorie intake, but you have to be very careful and diligent if you want to reduce your carb intake. Too often, even geniuses can eff up with their resolve, allowing the calories to slip in.
If there is one thing for the reader to take home now, it is the fact that so much of your intake is what you would forget when asked: “I don’t eat at all, but I still gain weight!” The blame is shifted to last year’s hysterectomy, gall bladder surgery, thyroid problems, baby, genetics, and even the weather!

Eating clean will bring in results, especially if you are active physically, and not merely doing what my son said (when asked about his exercise of the day), “I worked out my fingers really hard, playing FIFA World Cup on my Playstation!”

Keeping an online journal lets you be objective in analysing your results:

So, I know how much tighter I should control my food, or when to be a little easier on myself, without losing track of the larger goals.
I also keep a mini-diary in the site, like this:

So you think you burn a thousand calories in the treadmill, so you can hog that dinner tonight? Look at this:

I believe I burn more than 3500 calories a day, but that does not make an effing difference to the computer! So, sadly, we have to believe the records. Moral of the story:
Keep your food journal diligently, and learn from your mistakes. It takes 5-10 minutes a day. It gives you more rewards than Twitter/Facebook/blogging, and other things for which we try to carve out some time.
Happy eating, this Valentine’s Day! Incidentally, if you think of gifting me a bottle of Ballantine’s for next year’s V Day, think of a fifty year old single malt instead. It’s twice my age!